A thing to quickly evaluate Ruby gem maturity and answer "Is it any good?". Like this: 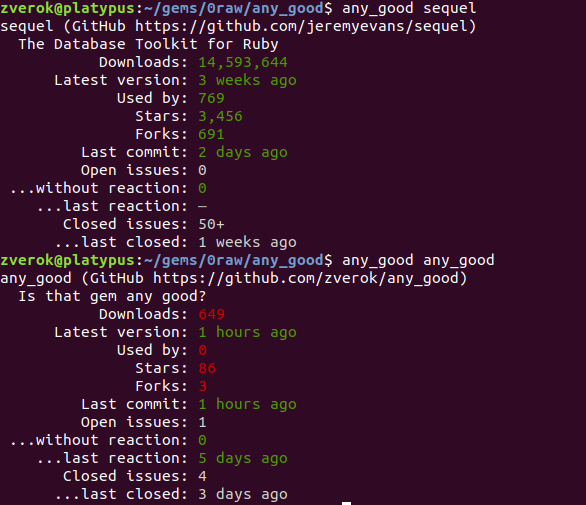 Just a report of some numbers and facts from rubygems.org and GitHub repo of the gem in question, to understand how risky it would be to use it.

I find myself constantly repeating this process for some new gems I spotted somewhere: going to their gem page and repo page to understand how well it maintained or is it abandoned, and is it something new that still have to get its ways and popularity.

This gem is just a quick one-evening experiment on whether it can be automated in a helpful manner.

What are the colors? Are you criticizing gems?..

The colors (green-yellow-red) are just based on my own subjective "thresholds". Maybe they could become configurable in future versions, if any. "Yellow" and "red" aren't, in fact, "bad", it is "point of attention" when judging whether you'll give a chance to some gem, and how important are they, depends on the situation.

The colors DO NOT mean to "score" the gems (this gem is bad) or to compare "which gem is better", but the typically DO give some insights on the gem's current status in the community.

Those insights aren't that accurate: for example, tzinfo is used by literally everyone, yet its GitHub repo has just ~200 stars. For another, inflecto is explicitly abandoned by its author, the last version was released four years ago, yet it is robust and widely used.

A large part of stats is taken from gem's GitHub repo.

Yes, the gem is not required to have the link to sources published. Yes, there are gems with sources on GitLab, BitBucket, or even SourceForge, God forbid. But again, as with colors, my subjective experience says me to check its GitHub if it is accessible. So the any_good does.

BTW, any_good connects to GitHub API anonymously, and anonymous connections are subject to harsh rate limiting, so if you use it a lot through one day, you may want to provide GITHUB_ACCESS_TOKEN environment variable (tokens are obtained here).

Is it any good?

Well, it is a quick one-evening experiment. So, no tests, no docs except this README, no config, and just hard-coded thresholds. But it works for me.

Who are you anyways?