Bootsnap is a library that plugs into Ruby, with optional support for YAML, to optimize and cache expensive computations. See How Does This Work.

This gem works on macOS and Linux.

Add bootsnap to your Gemfile:

If you are using Rails, add this to config/boot.rb immediately after require 'bundler/setup':

Note that bootsnap writes to tmp/cache (or the path specified by ENV['BOOTSNAP_CACHE_DIR']), and that directory must be writable. Rails will fail to boot if it is not. If this is unacceptable (e.g. you are running in a read-only container and unwilling to mount in a writable tmpdir), you should remove this line or wrap it in a conditional.

Note also that bootsnap will never clean up its own cache: this is left up to you. Depending on your deployment strategy, you may need to periodically purge tmp/cache/bootsnap*. If you notice deploys getting progressively slower, this is almost certainly the cause.

It's technically possible to simply specify gem 'bootsnap', require: 'bootsnap/setup', but it's important to load Bootsnap as early as possible to get maximum performance improvement.

You can see how this require works here.

If you are not using Rails, or if you are but want more control over things, add this to your application setup immediately after require 'bundler/setup' (i.e. as early as possible: the sooner this is loaded, the sooner it can start optimizing things)

Protip: You can replace require 'bootsnap' with BootLib::Require.from_gem('bootsnap', 'bootsnap') using this trick. This will help optimize boot time further if you have an extremely large $LOAD_PATH.

Note: Bootsnap and Spring are orthogonal tools. While Bootsnap speeds up the loading of individual source files, Spring keeps a copy of a pre-booted Rails process on hand to completely skip parts of the boot process the next time it's needed. The two tools work well together, and are both included in a newly-generated Rails applications by default.

All Bootsnap features are enabled in development, test, production, and all other environments according to the configuration in the setup. At Shopify, we use this gem safely in all environments without issue.

If you would like to disable any feature for a certain environment, we suggest changing the configuration to take into account the appropriate ENV var or configuration according to your needs.

Bootsnap cache misses can be monitored though a callback:

event is either :miss or :stale. You can also call Bootsnap.log! as a shortcut to log all events to STDERR.

To turn instrumentation back off you can set it to nil:

How does this work?

Bootsnap optimizes methods to cache results of expensive computations, and can be grouped into two broad categories:

(This work is a minor evolution of bootscale).

Upon initialization of bootsnap or modification of the path (e.g. $LOAD_PATH), Bootsnap::LoadPathCache will fetch a list of requirable entries from a cache, or, if necessary, perform a full scan and cache the result.

Later, when we run (e.g.) require 'foo', ruby would iterate through every item on our $LOAD_PATH ['x', 'y', ...], looking for x/foo.rb, y/foo.rb, and so on. Bootsnap instead looks at all the cached requirables for each $LOAD_PATH entry and substitutes the full expanded path of the match ruby would have eventually chosen.

If you look at the syscalls generated by this behaviour, the net effect is that what would previously look like this:

The following diagram flowcharts the overrides that make the *_path_cache features work.

Bootsnap classifies path entries into two categories: stable and volatile. Volatile entries are scanned each time the application boots, and their caches are only valid for 30 seconds. Stable entries do not expire -- once their contents has been scanned, it is assumed to never change.

In addition to the Bootsnap::LoadPathCache::Cache source, this diagram may help clarify how entry resolution works: 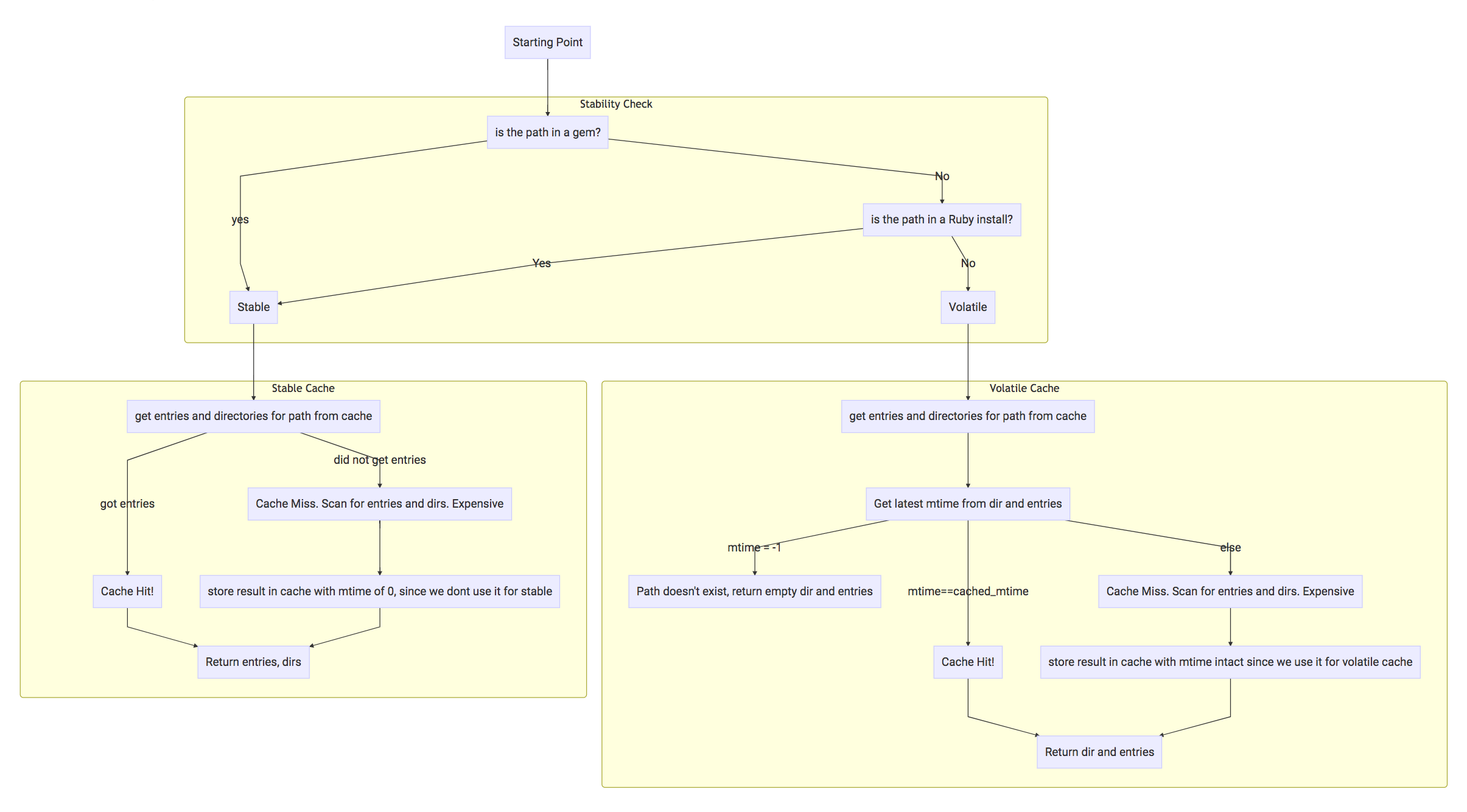 It's also important to note how expensive LoadErrors can be. If ruby invokes require 'something', but that file isn't on $LOAD_PATH, it takes 2 * $LOAD_PATH.length filesystem accesses to determine that. Bootsnap caches this result too, raising a LoadError without touching the filesystem at all.

(A more readable implementation of this concept can be found in yomikomu).

Ruby has complex grammar and parsing it is not a particularly cheap operation. Since 1.9, Ruby has translated ruby source to an internal bytecode format, which is then executed by the Ruby VM. Since 2.3.0, Ruby exposes an API that allows caching that bytecode. This allows us to bypass the relatively-expensive compilation step on subsequent loads of the same file.

We also noticed that we spend a lot of time loading YAML documents during our application boot, and that MessagePack and Marshal are much faster at deserialization than YAML, even with a fast implementation. We use the same strategy of compilation caching for YAML documents, with the equivalent of Ruby's "bytecode" format being a MessagePack document (or, in the case of YAML documents with types unsupported by MessagePack, a Marshal stream).

These compilation results are stored in a cache directory, with filenames generated by taking a hash of the full expanded path of the input file (FNV1a-64).

Whereas before, the sequence of syscalls generated to require a file would look like:

This may look worse at a glance, but underlies a large performance difference.

(The first three syscalls in both listings -- open, fstat64, close -- are not inherently useful. This ruby patch optimizes them out when coupled with bootsnap.)

Bootsnap writes a cache file containing a 64 byte header followed by the cache contents. The header is a cache key including several fields:

If the key is valid, the result is loaded from the value. Otherwise, it is regenerated and clobbers the current cache.

Putting it all together

Imagine we have this file structure:

When we call require 'foo' without bootsnap, Ruby would generate this sequence of syscalls:

If we call require 'nope' without bootsnap, we get:

In development environments the bootsnap compilation cache is generated on the fly when source files are loaded. But in production environments, such as docker images, you might need to precompile the cache.

To do so you can use the bootsnap precompile command.

When not to use Bootsnap

Non-local filesystems: Bootsnap depends on tmp/cache (or whatever you set its cache directory to) being on a relatively fast filesystem. If you put it on a network mount, bootsnap is very likely to slow your application down quite a lot.