CarbonMU is a general-purpose, extendable MUD/MUSH server framework written in Ruby. It's designed to scale to thousands of players, handle a wide variety of game types, from classic hack-n-slash MUDs to innovative text-based social communities. CarbonMU is not ready for public use by non-developers, but we welcome user contributions to help move the project along.

Where to talk about CarbonMU

See this wiki page for the latest updates on what's on the todo list. You are more than welcome to get involved! Feel free to open issues with questions, join discussions, or ask if you need help finding a task suitable for your interest and skill level.

CarbonMU is powered by DCell, a framework for distributed applications, which is built on top of Celluloid and ZeroMQ. CarbonMU uses MongoDB (via Mongoid) to store all of its data. The framework is designed to support a variety of connections by players, including basic TCP telnet, SSL telnet, and JSON over HTTP, API-style.

It's also intended to use a highly plugin-based model. A typical CarbonMU game will probably consist of the carbonmu core gem (what you see here), some number of community-supported third-party gems to provide things like a bboard system and other common utilities, and some game-specific custom code. It will not include a scripting engine or "softcode"-type functionality. 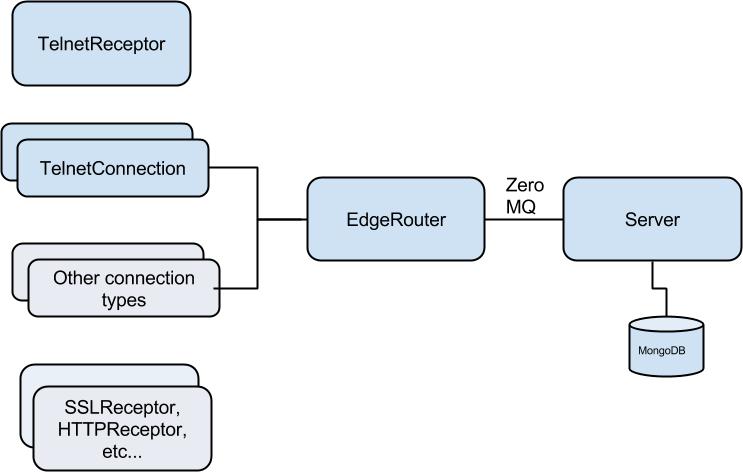 The EdgeRouter and Server are separate actors. The Server can be therefore be restarted to load new game code without dropping TCP connections.

There are four built-in descendants of GameObject in core (modules may choose to add their own). They are:

All of these are stored in MongoDB in the game_objects collection.

Of course, MU*s need a lot more data than just things that can be interacted with. There'll be things like bboard messages, mail, and thousands of other things games will want to add for their custom needs. Plugins are welcome to declare their own classes that inherit Mongoid::Document, and can even reference the GameObject descendants. There's no need to create 'data objects' and store them there.

Defining a new command is done by subclassing Command, adding one or more syntax calls using regular expressions with named captures for parameters, and providing an execute model that receives a @params hash with its named captures and a CommandContext instance in @context. See lib/commands for examples. This will continue to be fleshed out.

We will use a pubsub model (not yet implemented) to allow for both core functionality and people's gems to provide behavior when game events occur, as well as register their own events too.

This needs to be documented in detail once an example is done.

CarbonMU will have full i18n support on a per-player basis, allowing each player to see game messages in their own locales (of course, chat messages and so on will not be auto-translated).

Creating a game with CarbonMU

Create a new game with carbonmu create mygame. This will create a directory with some files that give you a general skeleton for your game and install some prerequisites.

You can play your newly created game by typing carbonmu start in that directory.

Look at the issues, find something to fix and fix it. Alternatively expand upon these instructions, they're suboptimal.

You will need ZeroMQ 3.x (4.1.x does not currently work, due to underlying issues in CarbonMU's dependencies), and MongoDB.

You can start a server with carbonmu start.