Nucleon plugin library and framework for building, synchronizing, and executing distributed actions and agents across heterogeneous networks of machines.

Origin and philosophy (aka: Why is this project being developed?)¶ ↑

This project began with the need to automate the management of our own infrastructure architecture starting in mid 2012. In early 2013 the initial work towards this goal was merged into two projects; Nucleon (general plugin management framework and execution environment), and CORL (this project).

We believe in the future, as machines become more connected and integrated, there will be profound need for frameworks that allow for the creation of semi or fully autonomous cyber entities that evolve across the cloud. These software entities will have varying capabilities and objectives but all will be capable of managing their machines, communicating with others in their network, and reproducing when neccessary. We want to help further a new era of smart infrastructure by providing an open source framework for developing such entities and their requisite environments.

Treating machines as autonomous software entities that can self manage allows for the agile and adaptive evolution of the computer systems we rely on to make our lives easier. Management dashboards and user controls are great but the future of the web belongs to the machines acting in our interests. CORL is being developed to help bring the machines to life (in a manner of speaking).

State of the project¶ ↑

CORL, and its parent Nucleon are still in alpha development and not yet ready for production unless you know how to develop with it and fix bugs. We use it for our infrastructure architecture internally, but there are kinks we still have to work out to meet the full set of intended architectual objectives. We are currently finalizing the acquarium, next comes the fish.

If you are a tinkerer and are passionate about machine managed systems or organically inspired software systems we invite your contributions in whatever form you wish to provide. Contact Adrian Webb ( adrian.webb@coralnexus.com ) with questions or feedback or just post an issue.

To get an overview of what plugins are currently provided, go here.

CORL is a programming framework and execution environment intended for:

Things CORL is NOT meant to be:¶ ↑

Care to walk through the CORL architecture on Prezi?

Our ultimate goal is the scalable application of our resources, time, and workflows, while allowing for evolutionary and adaptive growth of our IT infrastructure. 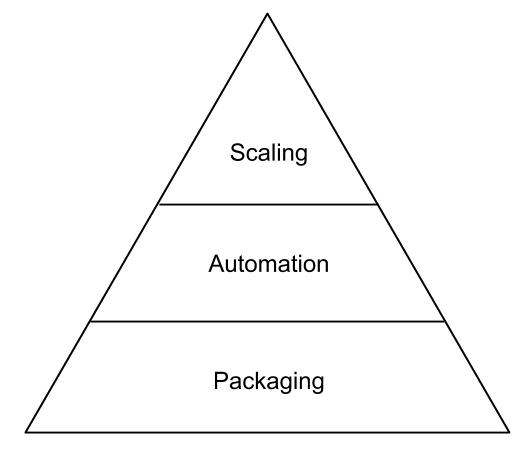 Packaging serves as a foundation for an automated architecture by providing reusable configuration managed images that can be easily launched across local and remote virtual machine and container providers. Our goal with packaging is to turn machines into programmable data objects which can be easily automated through diverse software systems.

Automation builds on packaged data and systems, and allows for reusable development of flexible integrated workflows. Automation capabilities depend on the degree to which machine inspection and management has been abstracted from the various configuration files, system services, and operating system nuances. CORL tries to bridge technologies that abstract the relevant data from the machine and various applications so we can more easily monitor and automate. Two modes of automation are possible; actions (fire and forget), and agents (managed services that utilize actions).

Scaling of infrastructure resources and workflows becomes easier when we have a flexible automation system that can work with machines as data, and deeply integrate with the software, services, and workflows we already employ.

To build adaptive infrastructure we treat each machine as a programmable data model that is connected to other machines in a shared network (data pool).

This also helps create an entirely hands off administration process that is easy to query and modify through remote action execution. 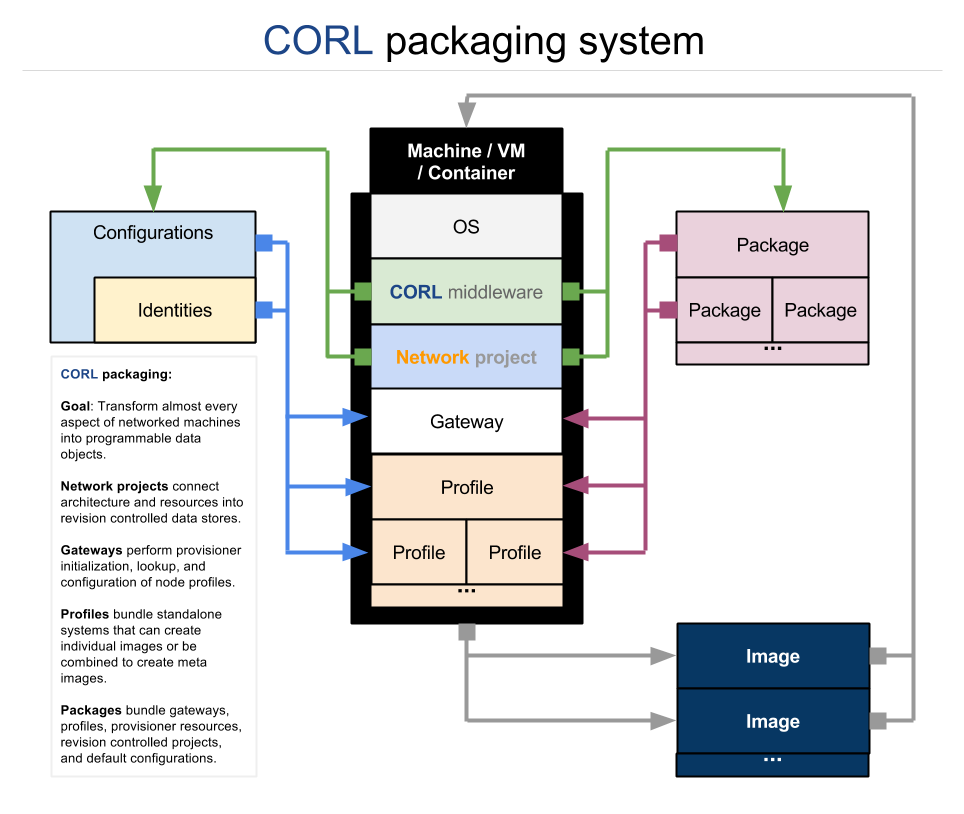 To read more on the CORL packaging system, see the packaging overview.

The ability to create, reuse, and extend integrated development and administration workflows across standardized plugin interfaces gives us the ability to focus on the task at hand while allowing for the creation of different interface implementations when needed. 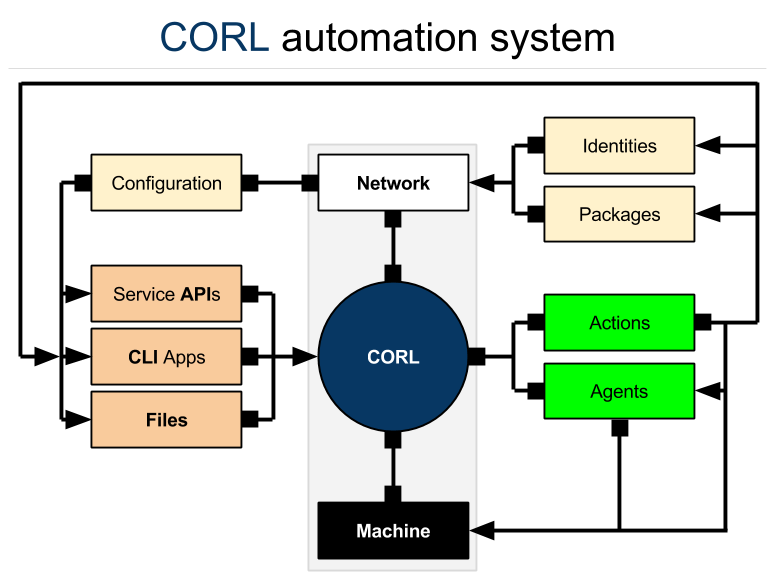 CORL is designed so it requires few dependencies outside of the Ruby language and some useful Gems.

See the installation instructions for information on requirements and getting CORL installed on your machines.

This library has been developed with and should support MRI Ruby versions:

If something doesn't work on one of these Ruby versions, it's a bug.

This library may inadvertently work (or seem to work) on other Ruby implementations, but support will only be provided for the versions listed above. Rubinius is being tested and will ultimately be supported.

This library currently does not work on JRuby due to CORL gem dependencies, such as Rugged, that provide C Ruby extensions (which JRuby does not support).

We have developed this so far pretty much entirely on Ubuntu but the core framework should work with other Linux distributions. There are known issues with Windows when executed through Vagrant and Cygwin.

This framework should be considered unstable and likely to break as remaining bugs and unit testing are completed going forward. When we reach version 1.0.0 full semantic versioning will be ahered to. Until then the minor version specifies a major architectural change, and patch versions could fix bugs and revise features that could break backward compatibility.