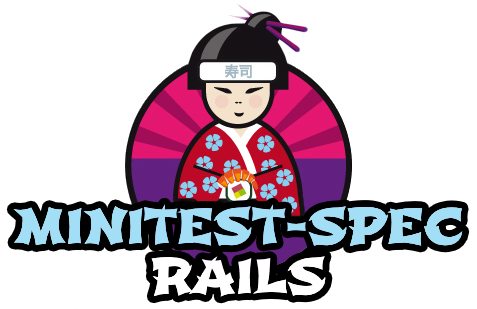 Existing or new Rails applications that use the default Rails testing structure can simply drop in the minitest-spec-gem and start writing their tests in the new spec DSL. Since MiniTest::Spec is built on top of MiniTest::Unit, a replacement for Test::Unit, all of your existing tests will continue to work.

Our master branch is tracking rails 5.1 up to 6.x active development.

Our 3-x-stable branch is meant for both Rails 3.x or 4.0 specifically. This version uses the latest 4.x series of minitest.

How is this different than MiniTest::Rails?

To start off both Mike Moore (@blowmage) and I have worked together and we both LOVE MiniTest::Spec. Both projects aim to advocate MiniTest and make Rails integration as easy as possible. However, there are a few key differences in our projects. Some of these differences may go away in time too. As always, choose the tool you think fits your needs. So how, is minitest-spec-rails different than minitest-rails?

So the goal of this project is to make Rails 3 or 4 applications just work as if rails-core had decided to support MiniTest::Spec all along. We believe that eventually that day will come and when it does, all your tests will still work! So bundle up and get started!

RSpec 3 is also moving away from the outer describe test type inference, as described in this line from their release notes.

Spec types are no longer inferred by location, they instead need to be explicitly tagged. The old behaviour is enabled by config.infer_spec_type_from_file_location!, which is still supplied in the default generated spec_helper.rb. (Xavier Shay, Myron Marston)

Not that we want to mimic RSpec, but the aim of this gem is very straight forward and minimalistic. We simply want to expose the Minitest Spec::DSL and core assertion style within ActiveSupport. Period. So it is very possible that us matching outer describe to classes is simply going to go away one day soon.

Just for reference, here is a full list of each of Rails test case we support.

The described_class method is available both via a class method and an instance method in any Rails test case. It is guaranteed to work despite the described level too. This allows class level macros to be built, much like Shoulda. Remember, it can only do this if you follow Rails naming conventions for your tests.

If you are migrating away from Shoulda, then minitest-spec-rails' mini_shoulda feature will help. To enable it, set the following configuration in your test environment file.

Doing so only enables a few aliases that allow the Shoulda context, should, and should_eventually methods. The following code demonstrates the full features of the mini_shoulda implementation. It basically replaces the shell of shoulda-context in a few lines of code.

If you prefer the assertions provided by shoulda-context like assert_same_elements, then you may want to consider copying them from here and including them in MiniTest::Spec yourself. I personally recommend just replacing these assertions with something more modern. A few examples are below.

I highly suggest that you stay away from matchers since MiniTest::Spec gives you all the tools you need to write good tests. Staying away from matchers will make your code's tests live longer. So my advice is to stay away from things like .should == and just write .must_equal instead. However, if matchers are really your thing, I recommend the minitest-matchers gem. You can also check out the valid_attribute gem built on top of minitest-matchers.

Alternatively, try the mintest-matchers_vaccine gem to avoid infecting the objects that you want to test.

If you are upgrading from Test::Unit, there are a few missing assertions that have been renamed or are no longer available within MiniTest.

If you are using Mocha for mocking and stubbing, please update to the latest, 0.13.1 or higher so it is compatible with the latest MiniTest. If you do not like the deprecation warnings in older versions of Rails, just add this below the require 'rails/all' within your application.rb file :)

If you are using minitest-spec-rails with Rails 3.0, then your controller and mailer tests will need to use the tests interface for the assertions to be setup correctly within sub describe blocks. I think this is a bug with class_attribute within Rails 3.0 only. So use the following patterns.

If your view helper tests give you an eror like this: RuntimeError: In order to use #url_for, you must include routing helpers explicitly., this is something that is broken only for Rails 3.1 and 3.2, both 3.0 and 4.0 and above do not exhibit this error. I have heard that if you include Rails.application.routes.url_helpers in your tests or inject them into the helper module before the test it may work. Lemme know what you find out.

We run our tests on GitHub Actions. If you detect a problem, open up a github issue or fork the repo and help out. After you fork or clone the repository, the following commands will get you up and running on the test suite.

We have a few branches for each major Rails version.