Recommendable is a gem that allows you to quickly add a recommendation engine for Likes and Dislikes to your Ruby application using my version of Jaccardian similarity and memory-based collaborative filtering.

Bundling one of the queueing systems above is highly recommended to avoid having to manually refresh users' recommendations. If you bundle Sidekiq, you should also include 'sidekiq-middleware' in your Gemfile to ensure that a user will not get enqueued more than once at a time. If bundling Resque, you should include 'resque-loner' for this. As far as I know, there is no current way to avoid duplicate jobs in DelayedJob. Queueing for Torquebox is also supported.

Add the following to your application's Gemfile:

Please note that you currently must need to place Recommendable below your ORM and queueing system in the Gemfile. If you are using Sidekiq and ActiveRecord, please place gem recommendable below both gem 'rails' and gem 'sidekiq'.

After bundling, you should configure Recommendable. Do this somewhere after you've required it, but before it's actually used. For example, Rails users would create an initializer (config/initializers/recommendable.rb):

The values listed above are the defaults. I recommend playing around with the nearest_neighbors setting. A higher value will provide more accurate recommendations at the cost of more time spent generating them.

If your application uses multiple ORMs, you must configure Recommendable to use the correct one. For example:

In your model that will be receiving recommendations:

To ensure that users' recommendations are processed after they rate items, make sure your bundled queue system is running:

That's it! Please note, however, that currently only one model may receive recommendations.

For more details on how to use Recommendable in your application, check out the detailed guide or see the documentation.

Recommendable requires Redis to deliver recommendations. The collaborative filtering logic is based almost entirely on set math, and Redis is blazing fast for this.

NOTE: Your Redis database MUST be persistent. All ratings are stored permanently in Redis. If you're worried about Redis losing data, keep backups.

For Mac OS X users, homebrew is by far the easiest way to install Redis. Make sure to read the caveats after installation!

For Linux users, there is a package on apt-get.

Redis will now be running on localhost:6379. After a second, you can hit ctrl-\ to detach and keep Redis running in the background.

I'll let Randall Munroe of XKCD take this one for me: 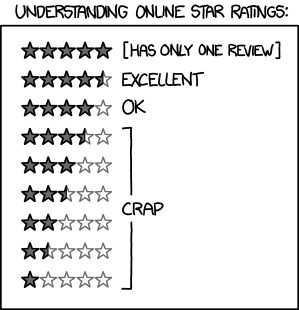