Two implementations are provided: a MRI C extension which uses the "ref10" implementation from the SUPERCOP benchmark suite, and a pure Java version based on str4d/ed25519-java.

Ed25519 is one of two notable algorithms implemented atop the Curve25519 elliptic curve. The x25519 gem is a related project of this one, and implements the X25519 Diffie-Hellman key exchange algorithm on the Montgomery form of Curve25519. 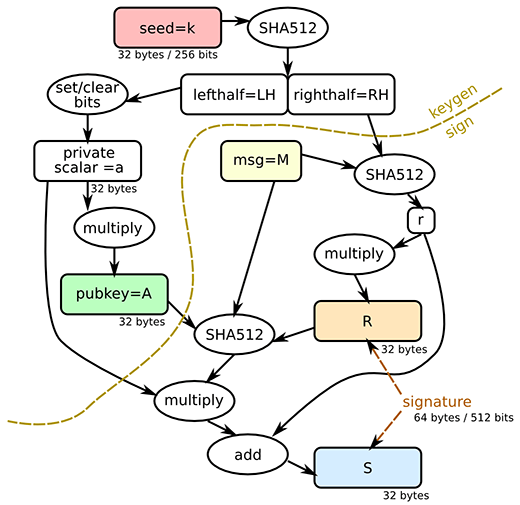 Ed25519 has a number of unique properties that make it one of the best-in-class digital signature algorithms:

You can read more on Dan Bernstein's Ed25519 site.

Is it any good?

Have questions? Want to suggest a feature or change? Join a discussion group:

ed25519.rb is supported on and tested against the following platforms:

Require ed25519.rb in your Ruby program:

Obtain the verify key for a given signing key:

Check the validity of a signature:

The verify method will return true if the signature verifies, or raise Ed25519::VerifyError if verification fails.

Keys can be serialized as 32-byte binary strings as follows:

The binary serialization can be passed directly into the constructor for a given key type:

The Ed25519 "ref10" implementation from SUPERCOP was lovingly crafted by expert security boffins with great care taken to prevent timing attacks. The same cannot be said for the C code used in the ed25519.rb C extension or in the entirety of the provided Java implementation.

Care should be taken to avoid leaking to the attacker how long it takes to generate keys or sign messages (at least until ed25519.rb itself can be audited by experts who can fix any potential timing vulnerabilities)

ed25519.rb relies on a strong SecureRandom for key generation. Weaknesses in the random number source can potentially result in insecure keys.

Bug reports and pull requests are welcome on GitHub at https://github.com/RubyCrypto/ed25519. This project is intended to be a safe, welcoming space for collaboration, and contributors areexpected to adhere to the Contributor Covenant code of conduct.

Everyone interacting in the ed25519.rb project’s codebases, issue trackers, chat rooms and mailing lists is expected to follow the code of conduct.