This spree extension is built on CanCan to dynamically add new roles and define its access through permissions.

Try Spree Admin Roles and Access for Spree 4-1 with direct deployment on Heroku:

Try Spree Admin Roles and Access for Spree 3-4 with direct deployment on Heroku:

Try Spree Admin Roles and Access for Spree 3-1 with direct deployment on Heroku:

Add spree_admin_roles_and_access to your Gemfile:

Bundle your dependencies and run the installation generator:

From Admin end, There are three menu's in the configuration Tab:

Pattern of the permissions

After updating the gem version. Run rails g spree_admin_roles_and_access:install to get the latest migrations. This includes a migration that generates a permission set per user role. With this, you should be able to continue using the original roles as you were earlier.

The original relationship between roles and permissions can be accessed via, legacy_roles & legacy_permissions. They are not supported or editable via the admin interfaces and are only mantained for use in our migration task.

Note in the previous version read action was only for show. That has been superseded by read action now implying both show and index.

Be sure to bundle your dependencies and then create a dummy test app for the specs to run against.

For older versions of spree

If you are using older version of spree. You can use the following version, please check the relavent readme for version specific installation guide.

See It In Action 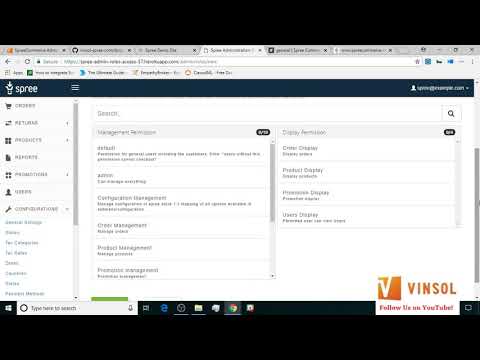