A gem to measure production code usage, showing a counter for the number of times each line of code that is executed. Coverband allows easy configuration to collect and report on production code usage. It reports in the background via a thread or can be used as Rack middleware, or manually configured to meet any need.

Note: Coverband is not intended for test code coverage, for that we recommended using SimpleCov.

The primary goal of Coverband is giving deep insight into your production runtime usage of your application code, while having the least impact on performance possible.

Coverband stores coverage data in Redis. The Redis endpoint is looked for in this order:

The redis store can also be explicitly defined within the coverband.rb. See advanced config.

Add this line to your application's Gemfile, remember to bundle install after updating:

No custom code or middleware required

With older versions of coverband, projects would report to redis using rack or sidekiq middleware. After coverband 4.0, this should no longer be required and could cause performance issues. Reporting to redis is now automatically done within a background thread with no custom code needed.

The Railtie integration means you shouldn't need to do anything else other than ensure Coverband is required after Rails within your Gemfile.

The web index as available on the Coverband Demo site

Mounting as a Rack App

Coverband comes with a mountable rack app for viewing reports. For Rails this can be done in config/routes.rb with:

But don't forget to protect your source code with proper authentication. Something like this when using devise:

or you can enable basic auth by setting ENV['COVERBAND_PASSWORD'] or via your configuration config.password = <YOUR_COMPLEX_UNGUESSABLE_PASSWORD>

The coverage server can also be started standalone with a rake task:

The web UI should then be available here: http://localhost:9022/

If you want to run on an alternative port:

This is especially useful for projects that are api only and cannot support the mounted rack app. To get production coverage, point coverband at your production redis server and ensure to checkout the production version of your project code locally.

Take Coverband for a spin on the live Heroku deployed Coverband Demo. The full source code for the demo is available to help with installation, configuration, and understanding of basic usage.

If you need to configure coverband, this can be done by creating a config/coverband.rb file relative to your project root.

Below is an example config file for a Rails 5 app:

Do you use figaro, mc-settings, dotenv or something else to inject environment variables into your app? If so ensure you have that done BEFORE coverband is required.

For example if you use dotenv, you need to do this, see https://github.com/bkeepers/dotenv#note-on-load-order

Sometimes you have files that are known to be valuable perhaps in other environments or something that is just run very infrequently. Opposed to having to mentally filter them out of the report, you can just have them ignored in the Coverband reporting by using config.ignore as shown below. Ignore takes a string but can also match with regex rules see how below ignores all rake tasks as an example.

Coverband allows an optional feature to track all view files that are used by an application.

To opt-in to this feature... enable the feature in your Coverband config. 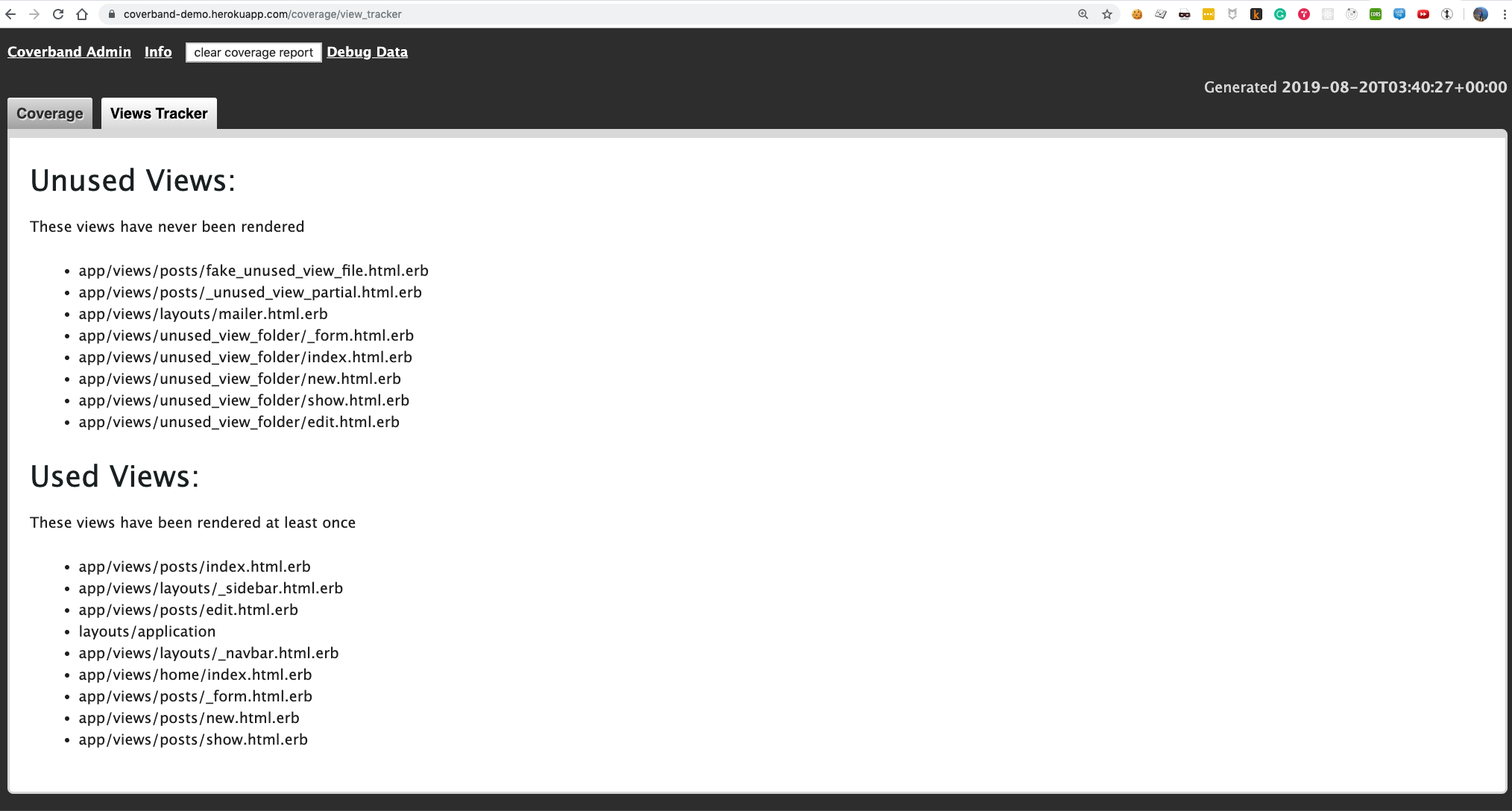 If all your coverage is being counted as loading or eager_loading coverage, and nothing is showing as runtime Coverage the initialization hook failed for some reason. The most likely reason for this issue is manually calling eager_load! on some Plugin/Gem. If you or a plugin is altering the Rails initialization process, you can manually flip Coverband to runtime coverage by calling these two lines, in an after_initialize block, in application.rb.

or if you know you are manually calling eager load anywhere in your initialization process immediately adfter call those two lines. A user reported an issue after calling ResqueWeb::Engine.eager_load! for example.

If you have many servers and they all hit Redis at the same time you can see spikes in your Redis CPU, and memory. This is do to a concept called cache stampede. It is better to spread out the reporting across your servers. A simple way to do this is to add a random wiggle on your background reporting. This configuration option allows a wiggle. The right amount of wiggle depends on the numbers of servers you have and how willing you are to have delays in your coverage reporting. I would recommend at least 1 second per server. Note, the default wiggle is set to 30 seconds.

Add a wiggle (in seconds) to the background thread to avoid all your servers reporting at the same time:

Coverband on very high volume sites with many server processes reporting can have a race condition which can cause hit counts to be inaccurate. To resolve the race condition and reduce Ruby memory overhead we have introduced a new Redis storage option. This moves the some of the work from the Ruby processes to Redis. It is worth noting because of this, it has a larger demands on the Redis server. So adjust your Redis instance accordingly. To help reduce the extra redis load you can also change the background reporting frequency.

Now that Coverband uses MD5 hashes there should be no reason to manually clear coverage unless one is testing, changing versions, possibly debugging Coverband itself.

This can also be done through the web if config.web_enable_clear is enabled.

Between the release of 4.0 and 4.1 our data format changed. This resets all your coverage data. If you want to restore your previous coverage data, feel free to migrate.

Adding Rake Tasks outside of Rails

Rails apps should automaticallly include the tasks via the Railtie.

For non Rails apps, either add the below to your Rakefile or to a file included in your Rakefile such as lib/tasks/coverband.rake if you want to break it up that way.

NOTE: That any value set for COVERBAND_DISABLE_AUTO_START is considered true, it does not match the string content but only checks the presence of the ENV variable.

In order to start coverband manually yourself when this flag is enabled, call Coverband.configure followed by Coverband.start.

Note: To debug issues getting Coverband working. I recommend running in development mode, by turning verbose logging on config.verbose = true and passing in the Rails.logger config.logger = Rails.logger to the Coverband config. We respect the log level, and I would recommend log level info generally, but if you are investigating a problem Coverband logs additional data at the debug level. This makes it easy to follow in development mode. Be careful to not leave these on in production as they will affect performance.

If you are trying to debug locally wondering what code is being run during a request. The verbose modes config.verbose = true && Rails.logger.level = :debug. With true set it will output the number of lines executed per file, to the passed in log.

If you start seeing SystemStackError: stack level too deep errors from background jobs after installing Coverband, this means there is another patch for ResqueWorker that conflicts with Coverband's patch in your application. To fix this, change coverband gem line in your Gemfile to the following:

If you currently have require: false, remove the 'coverband' string from the require array above so the gem line becomes like this:

This conflict happens when a ruby method is patched twice, once using module prepend, and once using method aliasing. See this ruby issue for details. The fix is to apply all patches the same way. Coverband by default will apply its patch using prepend, but you can change that to method aliasing by adding require: ['alternative_coverband_patch'] to the gem line as shown above.

For Rails, we will follow the policy of the Rails team maintenance policy. We officially support the last two major release versions, while providing minimal support (major bugs / security fixes) for an additional version. This means at the moment we primaryly target Rails 6.x, 5.x, and will try to keep current functionality working for Rails 4.x but may release new features that do not work on that target.

Coverband is compatible with JRuby. If you want to run on JRuby note that I haven't benchmarked and I believe the perf impact on older versions of JRuby could be significant. Improved Coverage support is in JRuby master, and will be in the next release.

If you are working on adding features, PRs, or bugfixes to Coverband this section should help get you going.

If you submit a change please make sure the tests and benchmarks are passing.

What files have been synced to Redis?

What is the coverage data in Redis?

The Coverband logo was created by Dave Woodall. Thanks Dave!

This is a MIT License project... See the file license.txt for copying permission.