Rodo is terminal-based todo manager written in Ruby with a inbox-zero mentality. It takes inspiration from bullet journalling. 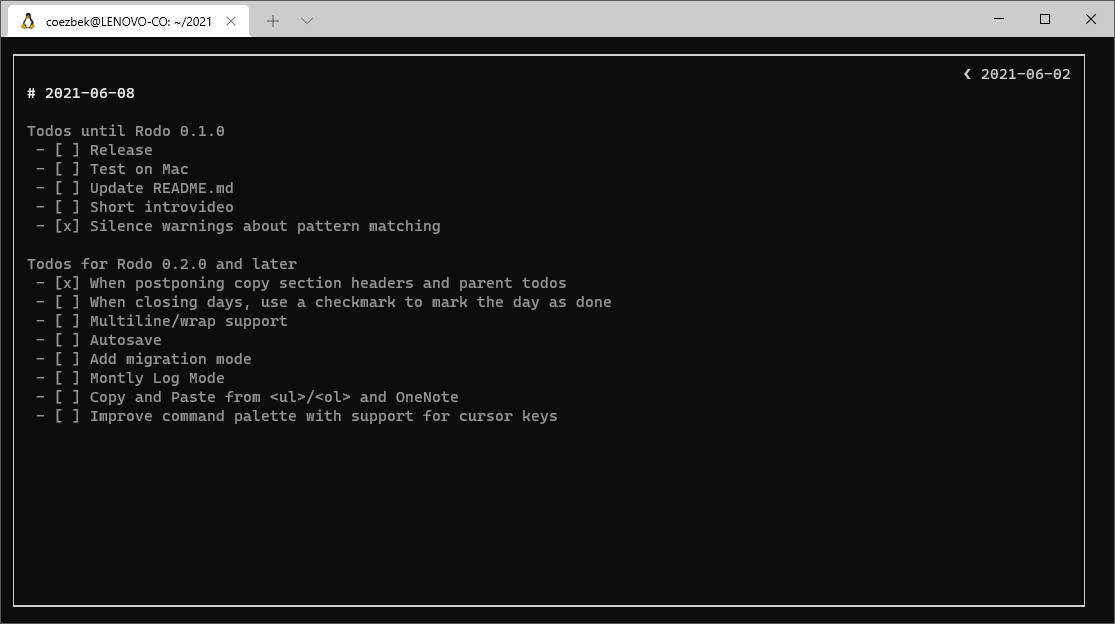 Rodo is a todo/task manager with a terminal-based user interface (TUI). It uses markdown as the underlying file format, which allows you to also edit the resulting todo files with any other text editor. Rodo structures your todos primarily using dates ("What do I need to do today?") and only then using sub-sections for projects.

Rodo is a text editor, but with a rich command vocabulary which perform actions related to todo and task management. It is similar to vi in that by default you are not in a mode where you can edit, but in a command mode where keystroke are interpreted as commands. For examples, pressing A will append a todo to the currently selected day and enter single line edit mode.

Rodo suggests that every day you start at a blank page and take over the relevant entries from the previous days. This idea originates from bullet journalling (e.g. https://bulletjournal.com/pages/learn), but gets software support in Rodo:

Rodo is programmed in Ruby and uses ncurses under the hood.

Rodo is work in progress but can already be used for basic todo tracking. Currently the following features are supported:

Rodo comes with no warranty and is still rough. The most notable things missing in the release 0.1.0:

Starting rodo without arguments will use '~/plan.md' as the markdown file.

Note: When running with rbenv you need to rbenv rehash after you installed the gem for the command line wrapper to become visible on the path.

By default rodo is in scroll mode, with the following keys supported:

In editing mode most keys will just create resulting in typing, except:

After checking out the repo, run bin/setup to install dependencies. You can also run bin/console for an interactive prompt that will allow you to experiment.

Bug reports and pull requests are welcome on GitHub at https://github.com/coezbek/rodo.

Todo trackers seem to scratch an itch for many. Notable related work from which Rodo draws inspiration: