At Puppet, Inc. we run acceptance tests on thousands of disposable VMs every day. VMPooler manages the life cycle of these VMs from request through deletion, with options available to pool ready instances, and provision on demand.

The recommended method of installation is via the Helm chart located in puppetlabs/vmpooler-deployment. That repository also provides Docker images of VMPooler.

VMPooler requires a Redis server. This is the data store used for VMPooler's inventory and queuing services.

VMPooler itself and the dev environment talked about below require additional Ruby gems to function. You can update the currently required ones for VMPooler by running ./update-gemfile-lock.sh. The gems for the dev environment can be updated by running ./docker/update-gemfile-lock.sh. These scripts will utilize the container on the FROM line of the Dockerfile to update the Gemfile.lock in the root of this repo and in the docker folder, respectively.

VMPooler uses a connection pool for Redis to improve efficiency and ensure thread safe usage. At Puppet, we run an instance with about 100 pools at any given time. We have to provide it with 200 Redis connections to the Redis connection pool, and a timeout for connections of 40 seconds, to avoid timeouts. Because metrics are generated for connection available and waited, your metrics provider will need to be able to cope with this volume. Prometheus or StatsD is recommended to ensure metrics get delivered reliably.

The following YAML configuration sets up two pools, debian-7-i386 and debian-7-x86_64, which contain 5 running VMs each:

VMPooler provides an API and web front-end (dashboard) on port :4567. See the provided YAML configuration example, vmpooler.yaml.example, to specify an alternative port to listen on.

A dashboard is provided to offer real-time statistics and historical graphs. It looks like this: 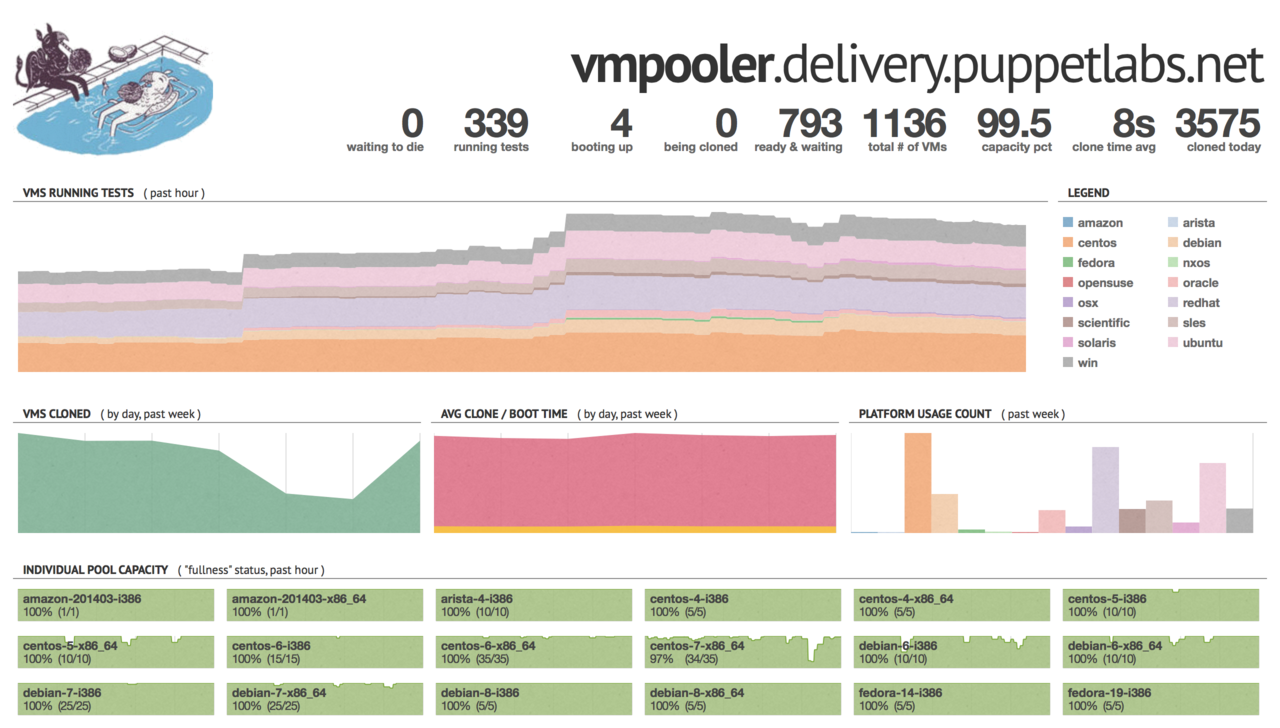 A Vagrantfile is included in this repository so as to provide a reproducible development environment.

The Vagrant environment also contains multiple rubies you can utilize for spec test and the like. You can see a list of the pre-installed ones when you log in as part of the message of the day.

For more information about setting up a development instance of VMPooler or other subjects, see the docs/ directory.

Additionally, the Redis instance can be accessed at localhost:6379.

VMPooler is distributed under the Apache License, Version 2.0. See the LICENSE file for more details.